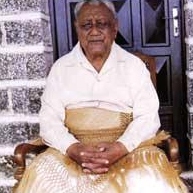 Who is Tomasi Kulimoetoke II?

Tomasi Kulimoetoke II (26 July 1918 – 7 May 2007) was the 50th Lavelua (King) of Wallis Island, which is known as Uvea in the Wallisian language, one of the three traditional kingdoms in the French overseas territory of Wallis and Futuna. He was born in Ha'afuasia in the Hahake District on Wallis island. He was elected king on 12 March 1959, after a 6 month-rule by a Council of Ministers. In early years, he supported closer links with France, recognising that Wallis was economically dependent on subsidies. After a national referendum, he signed treaty to make Wallis a French overseas territory (Territoire d'Outre-Mer) in 1961.He had six children.In 2002, the king riled many of his countrymen, as well as France, by shutting down the island's only newspaper because it had carried an editorial criticising him for giving refuge to a family friend, after she was sentenced to jail for embezzling public funds. Reformists also mocked the king's insistence that Wallisians dismount from their bicycles when passing his palace. In 2005, the King nearly lost his throne after his grandson, Tomasi Tuugahala, was sentenced to serve 18 months in prison for the involuntary manslaughter of a pedestrian who was killed in a drunk-driving accident on New Year's Eve. The King invited his grandson to take refuge in the royal palace, where he hid for four months before surrendering to the French gendarmes. The King's Prime Minister, holder of the title "Kalae Kivalu" urged the high administrator of the French government Xavier de Fürst to "quit the territory". The King also claimed that the incident was dealt with according to customary tribal law and that the French penal law should be abolished in Uvea. Reformists wished to depose the King and install Sosefo Mautamakia Ahau Halagahu, son of the late Halagahu as his successor in the northern district "Hihifo". Local riots occurred and the coronation did not take place. The King retained the throne and would be further recognised as such by France. Several hundred of the King's supporters marched and built roadblocks on the island during the crisis.His daughter Etua took over his ceremonial duties in later years, when he suffered from poor health. He died in Mata-Utu. A six-month mourning period was observed, during which it was taboo to mention a possible successor.

In What Year(When) Tomasi Kulimoetoke II Died? Date of Death, What Year Did He Die?

How old was Tomasi Kulimoetoke II when died?

How many years ago did Tomasi Kulimoetoke II die?

How many days has Tomasi Kulimoetoke II been dead?

It has been approximately 5688 days since Tomasi Kulimoetoke II died.

How many months has it been since Tomasi Kulimoetoke II died?

Where did Tomasi Kulimoetoke II die? Place of Death

Tomasi Kulimoetoke II closed his eyes on 06 May 2007 at Mata'Utu. The place of death is Mata'Utu.

When was Tomasi Kulimoetoke II born?

Where was Tomasi Kulimoetoke II Born? Place of birth

Tomasi Kulimoetoke II opened its eyes on 25 July 1918 at Ha'afuasia. Place of birth is Ha'afuasia.

How old would Tomasi Kulimoetoke II be today if were alive?

Tomasi Kulimoetoke II, who died in 2007, would have been 104 if were alive today.