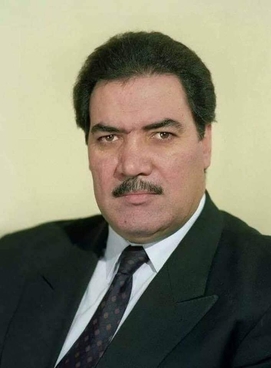 Who is Mohammad Najibullah?

Mohammad Najibullah Ahmadzai (Pashto/Dari: محمد نجیب‌الله احمدزی, Pashto pronunciation: [mʊˈhamad nad͡ʒibʊˈlɑ ahmadˈzai]; 6 August 1947 – 27 September 1996), commonly known as Dr. Najib, was an Afghan politician who served as the General Secretary of the People's Democratic Party of Afghanistan, the leader of the one-party ruling Democratic Republic of Afghanistan from 1986 to 1992 and as well as the President of Afghanistan from 1987 until his resignation in April 1992, shortly after which the mujahideen took over Kabul. After a failed attempt to flee to India, Najibullah remained in Kabul. He lived in the United Nations headquarters until his assassination by the Taliban after their capture of the city.A graduate of Kabul University, Najibullah held different careers under the People's Democratic Party of Afghanistan (PDPA). Following the Saur Revolution and the establishment of the Democratic Republic of Afghanistan, Najibullah was a low profile bureaucrat. He was sent into exile as Ambassador to Iran during Hafizullah Amin's rise to power. He returned to Afghanistan following the Soviet intervention which toppled Amin's rule and placed Babrak Karmal as head of the state, the party and the government. During Karmal's rule, Najibullah became head of the KHAD, the Afghan equivalent of the Soviet KGB. He was a member of the Parcham faction led by Karmal. During Najibullah's tenure as KHAD head, it became one of the most brutally efficient governmental organs. Because of this, he gained the attention of several leading Soviet officials, such as Yuri Andropov, Dmitriy Ustinov and Boris Ponomarev. In 1981, Najibullah was appointed to the PDPA Politburo. In 1985, Najibullah stepped down as the state security minister to focus on PDPA politics; he had been appointed to the PDPA Secretariat. Soviet General Secretary Mikhail Gorbachev, also the last Soviet leader, was able to get Karmal to step down as PDPA General Secretary in 1986, and replace him with Najibullah. For a number of months, Najibullah was locked in a power struggle against Karmal, who still retained his post of Chairman of the Revolutionary Council. Najibullah accused Karmal of trying to wreck his policy of National Reconciliation, a series of efforts by Najibullah to end the conflict. During his tenure as leader of Afghanistan, the Soviets began their withdrawal, and from 1989 until 1992, his government tried to solve the ongoing civil war without Soviet troops on the ground. While direct Soviet assistance ended with the withdrawal, the Soviet Union still supported Najibullah with economic and military aid, while Pakistan and the United States continued their support for the mujahideens. Throughout his tenure, he tried to build support for his government via the National Reconciliation reforms by distancing from socialism in favor of Afghan nationalism, abolishing the one-party state and letting non-communists join the government. He remained open to dialogue with the mujahideen and other groups, made Islam an official religion, and invited exiled businessmen back to re-take their properties. In the 1990 constitution, all references to communism were removed and Islam became the state religion. For various reasons, such changes did not win Najibullah any significant support. Following the August Coup in Moscow and the dissolution of the Soviet Union in December 1991, Najibullah was left without foreign aid. This, coupled with the internal collapse of his government (following the defection of general Abdul Rashid Dostum), led to his resignation in April 1992. In 1996, he was tortured and killed by the Taliban. In 2017, the pro-Najibullah Watan Party was created as a continuation of Najibullah's party.

In What Year(When) Mohammad Najibullah Died? Date of Death, What Year Did He Die?

How old was Mohammad Najibullah when died?

How many years ago did Mohammad Najibullah die?

How many days has Mohammad Najibullah been dead?

It has been approximately 9503 days since Mohammad Najibullah died.

How many months has it been since Mohammad Najibullah died?

Where did Mohammad Najibullah die? Place of Death

When was Mohammad Najibullah born?

Where was Mohammad Najibullah Born? Place of birth

Mohammad Najibullah opened its eyes on 05 August 1947 at Gardez. Place of birth is Gardez.

How old would Mohammad Najibullah be today if were alive?

Mohammad Najibullah, who died in 1996, would have been 75 if were alive today.