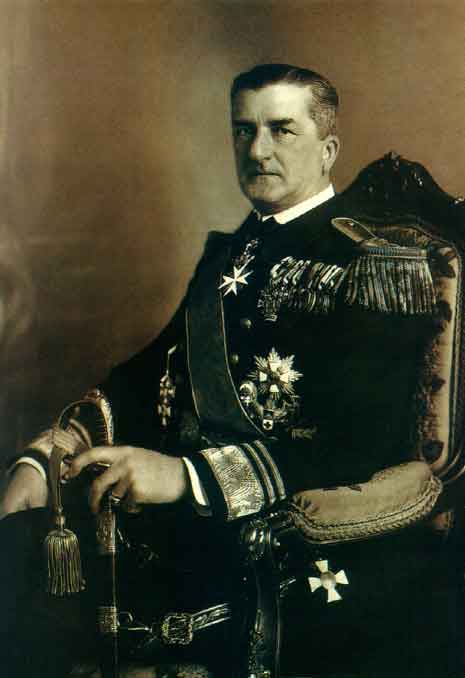 Who is Miklós Horthy?

Miklós Horthy de Nagybánya (Hungarian: Vitéz nagybányai Horthy Miklós; Hungarian pronunciation: [ˈviteːz ˈnɒɟbaːɲɒi ˈhorti ˈmikloːʃ]; English: Nicholas Horthy; German: Nikolaus Horthy Ritter von Nagybánya; 18 June 1868 – 9 February 1957), was a Hungarian admiral and statesman who served as the regent of the Kingdom of Hungary between the two World Wars and throughout most of World War II – from 1 March 1920 to 15 October 1944. Horthy started his career as a sub-lieutenant in the Austro-Hungarian Navy in 1896 and attained the rank of rear admiral in 1918. He saw action in the Battle of the Strait of Otranto and became commander-in-chief of the Navy in the last year of World War I; he was promoted to vice admiral and commander of the Fleet when Emperor-King Charles dismissed the previous admiral from his post following mutinies. During the revolutions and interventions in Hungary (1918–1920) from Czechoslovakia, Romania, and Yugoslavia, Horthy returned to Budapest with the National Army; the parliament subsequently invited him to become regent of the kingdom. Through the interwar period Horthy led an administration which was national conservative and antisemitic (however, it gradually moderated, especially after the discussion on September 22, 1920). Hungary under Horthy banned the Hungarian Communist Party as well as the Arrow Cross Party, and pursued an irredentist foreign policy in the face of the 1920 Treaty of Trianon. Charles, the former king, attempted twice to return to Hungary before the Hungarian government caved in to Allied threats to renew hostilities in 1921. Charles was then escorted out of Hungary into exile. Ideologically a national conservative, Horthy has sometimes been labeled as fascist. In the late 1930s, Horthy's foreign policy led him, reluctantly, into an alliance with Nazi Germany against the Soviet Union. With the grudging support of Adolf Hitler, Hungary succeeded in redeeming certain areas ceded to neighboring countries by the Treaty of Trianon. Under Horthy's leadership, Hungary gave support to Polish refugees in 1939 and participated in a supportive (as opposed to front-line) role in the Axis invasion of the Soviet Union in June 1941. Some historians view Horthy as unenthusiastic in contributing to the German war effort and the Holocaust in Hungary, as well as supposed reluctance to hand over more than 600,000 of the 825,000 Hungarian Jews to German authorities (out of fear that it may sabotage peace deals with Allied forces), coupled with several attempts to strike a secret deal with the Allies of World War II after it had become obvious that the Axis would lose the war, therefore eventually leading the Germans to invade and take control of the country in March 1944 in Operation Margarethe. However the Arrow Cross death squads, a right-wing Hungarian group, shot 10,000 to 15,000 Jews. Prior to the Nazi occupation within the area of Hungary 63,000 Jews were killed. In late 1944, 437,000 of Jews were deported to Auschwitz-Birkenau, where the majority were gassed on arrival. The direct role of Germany in Hungarian antisemitic policy was insignificant. For a long time, Nazi Germany did not exert any sort of pressure on Hungary to enact anti-Jewish laws. Hungarian antisemitic legislation was an organic, essentially Hungarian development. Nazi officials even opposed Hungarian deportation plans until 1943. Serbian historian Zvonimir Golubović has claimed that not only was Horthy aware of these genocidal massacres, but had approved of them such as those in the Novi Sad Raid. In October 1944, Horthy announced that Hungary had declared an armistice with the Allies and withdrawn from the Axis. He was forced to resign, placed under arrest by the Germans and taken to Bavaria. At the end of the war, he came under the custody of American troops.After providing evidence for the Ministries Trial of war crimes in 1948, Horthy settled and lived out his remaining years in exile in Portugal. His memoirs, Ein Leben für Ungarn (A Life for Hungary), were first published in 1953. He has a reputation as a controversial historical figure in contemporary Hungary.

In What Year(When) Miklós Horthy Died? Date of Death, What Year Did He Die?

How old was Miklós Horthy when died?

How many years ago did Miklós Horthy die?

How many days has Miklós Horthy been dead?

It has been approximately 23970 days since Miklós Horthy died.

How many months has it been since Miklós Horthy died?

Where did Miklós Horthy die? Place of Death

When was Miklós Horthy born?

Where was Miklós Horthy Born? Place of birth

Miklós Horthy opened its eyes on 17 June 1868 at Kenderes. Place of birth is Kenderes.

How old would Miklós Horthy be today if were alive?