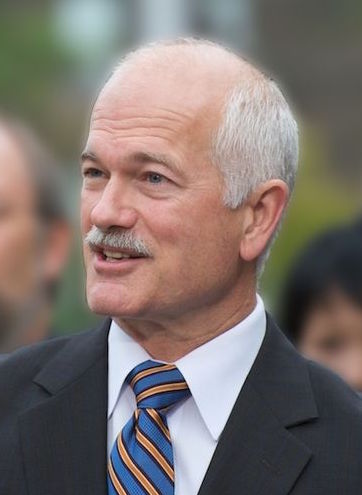 Who is Jack Layton?

John Gilbert Layton (July 18, 1950 – August 22, 2011) was a Canadian politician who served as the leader of the New Democratic Party (NDP) from 2003 to 2011 and Leader of the Official Opposition in 2011. He previously sat on Toronto City Council, occasionally holding the title of acting mayor or deputy mayor of Toronto during his tenure as city councillor. Layton was the member of Parliament (MP) for Toronto—Danforth from 2004 until his death. The son of a Progressive Conservative cabinet minister, Layton was raised in Hudson, Quebec. He rose to prominence in Toronto municipal politics, where he was one of the most prominent left-wing voices on the city and Metropolitan Toronto councils, championing many progressive causes. In 1991, he ran for mayor, losing to June Rowlands. Returning to council, he rose to become head of the Federation of Canadian Municipalities. In 2003, he was elected leader of the NDP on the first ballot of the convention. Under his leadership, support for the NDP increased in each election. The party's popular vote almost doubled in the 2004 election, which gave the NDP the balance of power in Paul Martin's minority government. In May 2005 the NDP supported the Liberal budget in exchange for major amendments, in what was promoted as Canada's "First NDP budget". In November of that year, Layton voted with other opposition parties to defeat the Liberal government over the findings of the Gomery Commission. The NDP saw further gains in the 2006 and 2008 elections, in which the party elected 29 and 37 MPs, respectively. In the 2011 election, Layton led the NDP to the most successful result in the party's history, winning 103 seats—enough to form the Official Opposition. Federal support for Layton and the NDP in the election was unprecedented, especially in the province of Quebec, where the party won 59 out of 75 seats. Layton died on August 22, 2011, after being diagnosed with cancer. He was survived by his wife of 23 years, fellow Toronto MP Olivia Chow. Details of the type and spread of the cancer, and the exact cause of death, were not released to the public. Shortly before he died, Layton had nominated Nycole Turmel as interim leader of the NDP and, consequently, of the Official Opposition. Tom Mulcair won the NDP leadership contest to replace Layton.

In What Year(When) Jack Layton Died? Date of Death, What Year Did He Die?

How old was Jack Layton when died?

How many years ago did Jack Layton die?

How many days has Jack Layton been dead?

It has been approximately 4057 days since Jack Layton died.

How many months has it been since Jack Layton died?

Where did Jack Layton die? Place of Death

When was Jack Layton born?

Where was Jack Layton Born? Place of birth

Jack Layton opened its eyes on 17 July 1950 at Montreal. Place of birth is Montreal.

How old would Jack Layton be today if were alive?