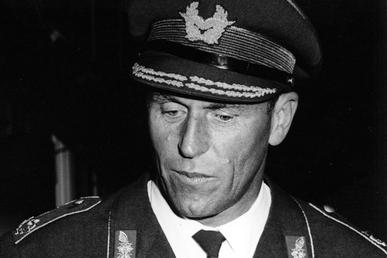 Johannes "Hannes" Trautloft (3 March 1912 – 11 January 1995) was a German Luftwaffe military aviator during the Spanish Civil War and World War II, and general in the postwar German Air Force. As a fighter ace, he is credited with 58 enemy aircraft shot down, including 5 in Spain, 8 on the Western Front and 45 on the Eastern Front of World War II. Born in Großobringen, Trautloft volunteered for military service in the Reichsheer of the Weimar Republic in 1931. In parallel, he was accepted for flight training with the Deutsche Verkehrsfliegerschule, a covert military-training organization, and at the Lipetsk fighter-pilot school. Following flight training, he served with Jagdgeschwader 134 "Horst Wessel" (JG 134—134th Fighter Wing) and was one of the first German volunteers to fight in the Spanish Civil War. From August to December 1936, he claimed five aerial victories. For his service in Spain he was awarded the Spanish Cross in Gold with Swords. Following his service in Spain, Trautloft held various command positions, and at the outbreak of World War II on 1 September 1939, he was the Staffelkapitän (squadron leader) of 2. Staffel (2nd squadron) of Jagdgeschwader 77 (JG 77—77th Fighter Wing). He claimed his first aerial victory during the Invasion of Poland and was appointed Gruppenkommandeur (group commander) of I. Gruppe of Jagdgeschwader 20 which later became III. Gruppe of Jagdgeschwader 51 (JG 51—51st Fighter Wing). In August 1940, during the Battle of Britain, Trautloft was given command of Jagdgeschwader 54 (JG 54—54th Fighter Wing). He led JG 54 in Operation Barbarossa, the German invasion of the Soviet Union in June 1941. There, he was awarded the Knight's Cross of the Iron Cross on 27 July 1941. Trautloft continued to lead JG 54 on the Eastern Front until July 1943 when he was called to the staff of the General der Jagdflieger (General of Fighters), assisting in the readiness, training and tactics of the Luftwaffe fighter force. After the war, Trautloft joined the new German Air Force of West Germany in 1957. Serving as deputy Inspector of the Air Force and commander of Luftwaffengruppe Süd (Air Force Group South), Trautloft retired in 1970 holding the rank of Generalleutnant (lieutenant general). He died on 11 January 1995 in Bad Wiessee.

In What Year(When) Hannes Trautloft Died? Date of Death, What Year Did He Die?

How old was Hannes Trautloft when died?

How many years ago did Hannes Trautloft die?

How many days has Hannes Trautloft been dead?

It has been approximately 10192 days since Hannes Trautloft died.

How many months has it been since Hannes Trautloft died?

Where did Hannes Trautloft die? Place of Death

Hannes Trautloft closed his eyes on 10 January 1995 at Bad Wiessee. The place of death is Bad Wiessee.

When was Hannes Trautloft born?

Where was Hannes Trautloft Born? Place of birth

How old would Hannes Trautloft be today if were alive?