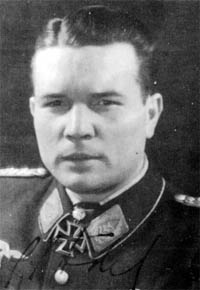 Who is Gustav Rödel?

Gustav Rödel (24 October 1915 – 6 February 1995) was a German fighter pilot and fighter ace who served during World War II in the Luftwaffe. Gustav Rödel was born on 24 October 1915 in Saxony. In 1933 the National Socialists came to power in Germany. Rödel had to choose a military career and he applied to join the Luftwaffe in late 1935 and was accepted the following year. After basic training he was selected to train as a fighter pilot. In 1938 Rödel completed his training and was assigned to Jagdgruppe 88, under the command of the Condor Legion. J/88 participated in the Spanish Civil War. There is no record of Rödel claiming any success in combat in Spain. In July 1939, Rödel was sent to Jagdgeschwader 21 (JG 21). On 1 September 1939, the German Reich attacked Poland beginning World War II in Europe. Operating with 2. Staffel (2nd Squadron) he claimed his first aerial victory on this day. In November 1939 he was transferred to Jagdgeschwader 27 and saw action in the Battle of Belgium and Battle of France in May and June 1940. Rödel claimed three aircraft shot down. In July 1940 Rödel was moved to 4./JG 27 and eventually appointed Staffelkapitän (Squadron Leader) of the Staffel effective from 1 September 1940. Rödel was credited with 10 Royal Air Force (RAF) aircraft in the Battle of Britain. In March 1941 Rödel was transferred to the Mediterranean theatre. Rödel served with JG 27 through the Battle of Greece and received credit for six aerial victories. In June 1941 Rödel was briefly posted to the Eastern Front to support Operation Barbarossa. He claimed only one victory in the Soviet Union. For his success he was awarded the Knight's Cross of the Iron Cross on 25 June 1941. Rödel was posted to North Africa with JG 27 soon after and remained there until November 1942. On 22 April he was appointed Geschwaderkommodore (Wing Commander) of JG 27. Subsequently, Rödel saw action over Sicily and Southern Italy in May 1943. On 20 June 1943 he was awarded the Oak Leaves to the Knight's Cross for 78 victories. In October 1943, JG 27 moved to Nazi Germany for Defence of the Reich operations and in June 1944 led the wing in the Battle of Normandy. He claimed his 98th and final victory on 5 July 1944. In December 1944 he served as a staff officer with the 2. Jagd Division until the German surrender in May 1945. Rödel was credited with 97 victories against the Western Allies and a single victory over Soviet Air Forces in over 980 combat missions. He flew the Messerschmitt Bf 109. In 1957, Rödel joined the Bundeswehr. He retired on 30 September 1971, holding the rank of Brigadegeneral.

In What Year(When) Gustav Rödel Died? Date of Death, What Year Did He Die?

How old was Gustav Rödel when died?

How many years ago did Gustav Rödel die?

How many days has Gustav Rödel been dead?

It has been approximately 10170 days since Gustav Rödel died.

How many months has it been since Gustav Rödel died?

Where did Gustav Rödel die? Place of Death

Gustav Rödel closed his eyes on 05 February 1995 at Bonn. The place of death is Bonn.

When was Gustav Rödel born?

Where was Gustav Rödel Born? Place of birth

Gustav Rödel opened its eyes on 23 October 1915 at Merseburg. Place of birth is Merseburg.

How old would Gustav Rödel be today if were alive?