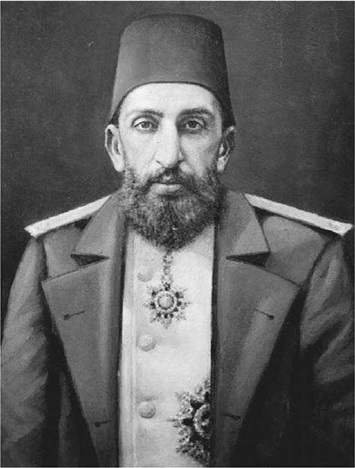 Who is Abdul Hamid II?

Abdul Hamid II or Abdülhamid II (Ottoman Turkish: عبد الحميد ثانی, romanized: Abdü’l-Ḥamîd-i-sânî; Turkish: II. Abdülhamid; 21 September 1842 – 10 February 1918) was the Sultan of the Ottoman Empire from 31 August 1876 to 27 April 1909, and the last sultan to exert effective control over the fracturing state. The time period which he reigned in the Ottoman Empire is known as the Hamidian Era. He oversaw a period of decline, with rebellions (particularly in the Balkans), and he presided over an unsuccessful war with the Russian Empire (1877–1878) followed by a successful war against the Kingdom of Greece in 1897. In accordance with an agreement made with the Republican Young Ottomans, he promulgated the Ottoman Empire's first Constitution, which was a sign of progressive thinking that marked his early rule. However, in 1878, citing disagreements with the Ottoman Parliament, he suspended both the short-lived constitution and the parliament. The modernization of the Ottoman Empire continued during his reign, including reform of the bureaucracy, the extension of the Rumelia Railway and of the Anatolia Railway, and the construction of the Baghdad Railway and of the Hejaz Railway. In addition, systems for population registration and control over the press were established, along with the first local modern law-school in 1898. The most far-reaching of the reforms occurred in education: many professional schools were established for fields including the law, arts, trades, civil engineering, veterinary medicine, customs, farming, and linguistics. Although Abdul Hamid II closed Istanbul University in 1881, it re-opened in 1900, and a network of secondary, primary, and military schools was extended throughout the empire. German firms played a major role in developing the Empire's railway and telegraph-systems. This modernization cost the empire its economic sovereignty, as its finances came under control of the Great Powers through the Ottoman Public Debt Administration. During Abdul Hamid's reign the Ottoman Empire became known for the massacres of Armenians and Assyrians of 1894–1896. Many attempts were made on Abdul Hamid's life during his reign. Amongst the many assassination attempts against him, one the most famous is the Yıldız assassination attempt of 1905 by the Armenian Revolutionary Federation. Large sections of the Ottoman intelligentsia also sharply criticized and opposed him due to his use of secret police to silence dissent and the Young Turks movement. In 1908, a secret revolutionary Young Turks organization known as the Committee of Union and Progress forced Abdul Hamid II to recall the parliament and reinstate the constitution in the Young Turk Revolution. Abdul Hamid attempted to reassert his absolutism a year later, resulting in his deposition by Unionist forces in an event known as the 31 March Incident in 1909.

In What Year(When) Abdul Hamid II Died? Date of Death, What Year Did He Die?

How old was Abdul Hamid II when died?

How many years ago did Abdul Hamid II die?

How many days has Abdul Hamid II been dead?

It has been approximately 38222 days since Abdul Hamid II died.

How many months has it been since Abdul Hamid II died?

Where did Abdul Hamid II die? Place of Death

When was Abdul Hamid II born?

Where was Abdul Hamid II Born? Place of birth

How old would Abdul Hamid II be today if were alive?